I haven’t posted for a while, because I’ve been preoccupied with preparations for a forthcoming project.   This is a piece of work that has been on the back-burner since 2010 when I completed my Masters thesis on the Stonehenge hammerstones – more on those later.

Sarsen stone is a strange and wonderful rock, and I shall write about its geology and mythology in the future.   In Britain there is a family of sarsen stones, conglomerates, that can be found in a band from Wiltshire all the way to Essex.   In Wiltshire, sarsen stone is usually made up of quartz sand in a siliceous cement.   In Hertfordshire, much larger pebbles are cemented together – known as “puddingstone”.   In Essex the stone is better known for its high iron content.

Perhaps the best-known sarsen stones are those that were used to build the prehistoric monuments of Stonehenge and Avebury.   Whatever form it takes, it is jolly hard stuff – but it has its uses.   For example, in Wiltshire sarsen has been used for building and street furniture, and in Hertfordshire there are objects made of puddingstone.   Visit Verulamium Museum and you’ll even see a rotary quern made of puddingstone.   So it is possible to work and use sarsen stone, and sarsen has been turned into objects throughout the past 4500 years or so.

There is a great deal to learn about how the techniques and tools of sarsen working have changed over time.   Much of our understanding of prehistoric sarsen working is theoretical; we have seventeenth- and eighteenth-century accounts of sarsen breaking; and the skills of the modern sarsen industry were lost when new materials and techniques were adopted for road building.

I recently spent a sunny afternoon starting to prepare some tools for prehistoric sarsen working.   These tools vary depending on their purpose and have their own chaine operatoire from procurement to abandonment.   Here are some photos of an object that I made to trial some of the sarsen working tools – an axe carving in a piece of sarsen stone. 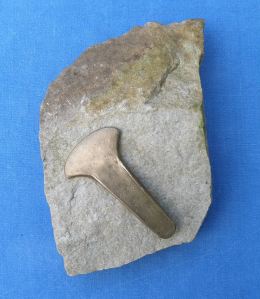