I can’t quite believe I’m going to try this.

But apparently you can knap a King Edward.

The awesome Beccy Scott at the British Museum, who is part of the Ice Age Island team, is known for replacing a flint nodule with a potato to demonstrate how knapping works. The potato is safer than sharp, shattery, flint bits flying all over the place.  That means it’s good for a demonstration, and for people to try out, when you haven’t got safety goggles to go around.

Not quite what I expected, but I might not be doing it right. This is what happened when I tried to reduce (=knap bits off) that first removal (=flake).

I even managed to take a bit off with an antler hammer. 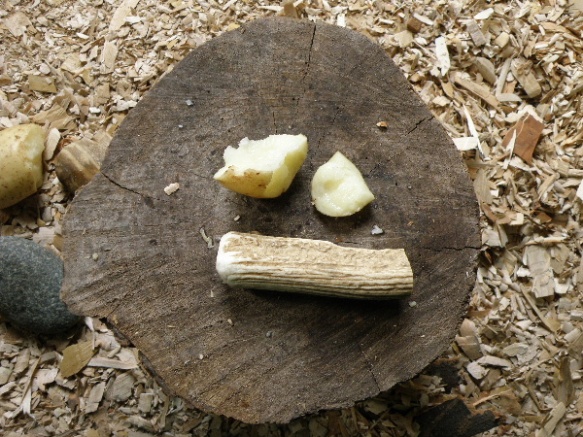 But it was mostly crushy and squashy rather than flakey.  I’d love to see Beccy’s Levallois demonstration.

Demonstrating ancient technology and ways of life, getting across archaeologists’ interpretations of prehistory, communicating modern understandings of the past, are all really important.  Whether it’s explaining why the digging methods and behaviours broadcast in Channel 5’s execrable “World War II: Battlefield Recovery” are terrible; or helping Primary School teachers (who themselves dropped history aged 13) to teach the Stone Age to their 7 year-old pupils; or persuading politicians that cutting the already-minuscule budgets for museums and archives is a false economy.  Misunderstandings about the past, and about what archaeologists and curators do, are legion.

Take flint knapping. It’s not something for grunting cave-men dressed in animal skins, so stupid they can only bash rocks together.  It’s a skilled activity, the principal way that modern humans and their ancestors made stone tools for hundreds of thousands of years.  Without flint knapping, would we be around today?  But how can a UK Primary School teacher, who has never been taught archaeology, who doesn’t have the skills, and who might struggle to get hold of the raw materials, best convey this awesomeness to their pupils?  That’s why Schools Prehistory  is introducing potato knapping to teachers.

Take the appalling TV series currently on Channel 5, “World War II: Battlefield Recovery”. The programme makers seem to have ignored advice and decided it would be OK to show dangerous digging behaviour and inappropriate excavation of human remains (and all before the UK 9pm watershed). The dangerous behaviour includes using a mechanical digger to cut trenches in ground suspected to contain unexploded ordnance.  Is this really what people think archaeology is like? I hope not, given they’ve been able to watch Time Team for years, and the fabulous Meet The Ancestors which, in its Revisited format, is currently on BBC4. But still, “World War II: Battlefield Recovery” got made.

Take the dreadful threats to local museums and archaeology services – there’s news every month about different local authorities planning to slash, or even cut completely, budgets for museums and heritage services (like Lancashire and Norfolk and Shropshire right now).  There is ample evidence for the economic value of our museums, and for ways in which they promote our health and well-being.  It’s a false economy to slash archaeology services in planning departments: Britain needs a mix of regeneration and new development to deal with issues such as housing need.  But the Council for British Archaeology is now describing parts of the country as “black holes” where local planning authorities have little or no access to historic environment specialists who could enable this economic growth.

The Council for British Archaeology – of which I am a Trustee – says,

Spending on ‘combined heritage’ (including archives, heritage, museums and galleries, conservation and listed building planning policy, and archaeology) by local authorities amounts to less than half of one per cent of all local authority spending.

We need to keep on, dispelling misconceptions about archaeology (cave-men, any fool can dig a trench…) and heritage (an expensive luxury that can be cut without consequence…).  That’s my Grand Challenge for archaeology.