I’m sitting quietly on the top floor of the Museum of Archaeology and Anthropology in Cambridge. A few other visitors have made it this far, but it’s been a quiet afternoon and I have the children’s activity table all to myself. It’s a very pleasing oak table, just over 2m long and about 1.5m wide. I can rest my feet on the bars that run lengthwise underneath the table. The museum has rustled up a couple of beech benches either side of the table. It’s very comfortable for a slouch like me.

The table is welcoming. Its size says “come and sit around me, with your family and friends”. It’s like a refectory table for communal dining. There is nothing private or exclusive about this large and solid piece of furniture, even though it looks like it might cost more than many people could afford.  At least, nothing exclusive about it given its context – in a nice open space in a nice open museum.

Size can affect the way we look at objects. I’ve been thinking about the size of axe heads, because I am busily making handles for different types of Bronze Age axes.  When is an axe head a useful tool, when is it a status symbol, when is it a toy or a trinket? It’s an axe head, right? So isn’t it a weapon, or for cutting down trees?

Take the display in the case just a few metres from where I am sitting.  A whole shelf of the case is given over to objects excavated from prehistoric lake villages in Switzerland. Most of the objects are Neolithic stone axe heads.  Some of these are fitted into collars for hafting, although none are fixed in full-size handles. A number of the axe heads are between roughly 10cm and 20cm long, but the majority are less than 10cm long, and some are really tiny indeed: 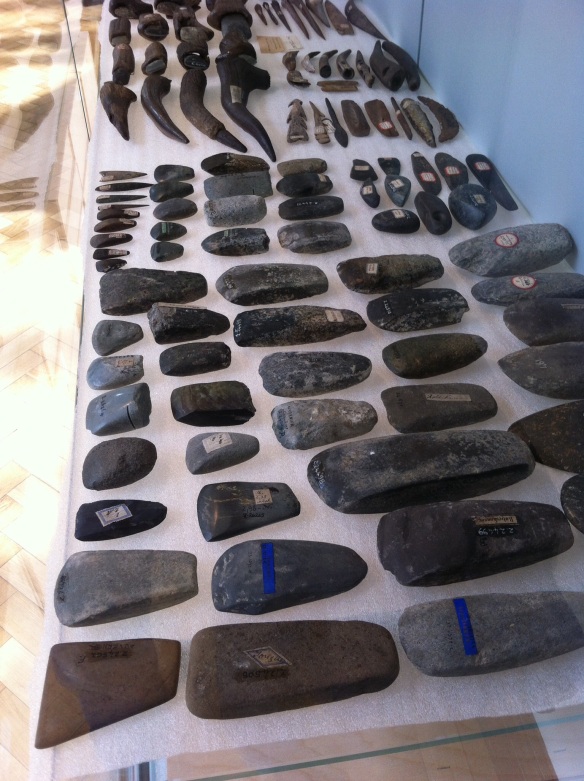 Maybe you can imagine using one of these axe heads, if it was in a handle. Maybe not cutting down a big tree, but trimming branches to make timbers for your new round house, perhaps? Cutting rods to make a wattle wall?  Chopping roots out of the ground to make it easier to sow seeds?

Every time you sharpen a tool, you remove some of its metal or stone. Perhaps some of the axe heads on display had been sharpened for the very last time, they had got too small to be useful, they were discarded; only to be excavated more than 4000 years later by some busybody who wanted to collect up this refuse.  This reduction in size, and its effect on the shape of the tool, is called the Frison effect.  Some tools can end up looking completely different by the time they have been shaped and reshaped over and over.  Archaeologists risk putting certain objects into many different categories, giving them different names, because of their different size, when actually they started out as pretty much the same thing.

One of my favourite examples of this in the Salaman Collection of tools, looked after by the Museum of St Albans.  It is possible to compare brand new woodworking chisels with ones that have been used for years, and are now only a few centimetres long because they have been sharpened so many times.

So why would anyone make really tiny axe heads?

In the museum catalogue they are described as ground stone artefacts; axe; point; projectile point. The objects are grouped under one accession number 1976.381.1-10. The uncertainty about what these tiny things really are is reflected in the catalogue,

Four tiny axes, or four tiny chisels? Six projectile points? It seems that the decision depends on how these little shaped and polished pieces of stone can be used. Projectile points; they could be arrowheads. Not that they look like they were hafted onto arrow shafts. No resin glue sticking to the stone, no wood preserved in the lake village’s waterlogged deposits.  Axe heads; to cut what, precisely? But chisels, well maybe, sometimes you need a narrow and slim cutting edge for a fine piece of woodwork. They are beautifully shaped and ground pieces of stone. Someone went to the trouble to make them look like this. 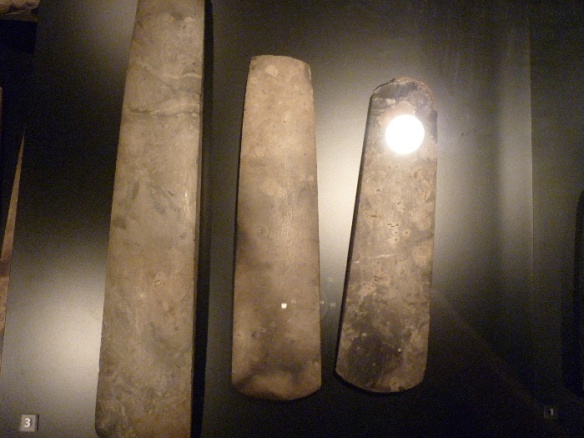 I have chosen this pretty poor photo deliberately.  My mother couldn’t get the whole of this museum display into her camera’s viewfinder, partly because she couldn’t get high enough over the glass cabinet, and partly because the flint axe head on the left is just so big.  The two other axe heads aren’t small either.  But the biggest is the best part of 50cm long.

Neither do these beautifully ground and polished stone tools show signs of having been fitted to handles.  They are on display, along with hundreds more, at the National Museum of Denmark, Copenhagen.

then a flint axe three times the length must weigh around 1455g.  That’s nearly 1.5kg, or the best part of 3lb.  Even my heaviest steel axe head for carving is only 2.2lb, and is a compact shape with a socket to fix it to the handle.   How do you think you would go about fixing that immense flint axe head in Copenhagen to a handle, to make a wieldy tool?  A bit impractical, isn’t it?

My point is that archaeological study of stone tools has often been the study of technology, and here’s where size really matters.  Tiny objects and huge objects falling outside a “normal”, “useful”, size range can be seen as technological anomalies, and therefore as something special and not a tool at all; whilst everything else in the middle of the range is handy, practical, workaday.  But it’s not that simple.

Is it clear where, on the sliding scale of tiny-small-normal-big-huge, usefulness begins and ends?  What about that Frison effect, and the result of reuse upon reuse?  What is normal, anyway?  We don’t use stone axes anymore, so it’s difficult to judge how these differently-sized objects were being used in the Neolithic, especially if we think only in terms of tools and weapons.  In fact, it’s not really that useful to think of tools as just tools, and of making things as simply a practical exercise in survival.

Objects, and making and using them, are bound up in what it means to be the person you are.  Think about your mobile ‘phone.  Quite often it’s an everyday object that you use for practical things, like communication or finding information on the move.  But you chose that particular ‘phone for various reasons, including its look and feel, the way you felt about it as much as the things it can do for you.  Maybe even in response to advertising, or the ‘phones that your friends have.  It is mundane and significant all at the same time.  Stone tools, no matter their size, are also mundane and significant at the same time.  This is why it is so important to study objects in relation to their context – where they were found, with what, how placed, and with what evidence for different use – and not as isolated things now on display in glass cabinets.

I recently visited the newly-redisplayed Museum of Archaeology and Anthropology in Cambridge.   Unfortunately I could see only the ground-floor space because of ongoing works upstairs, but it was really impressive nonetheless with some wonderful objects and interesting ideas presented with clarity.   Although the old archaeology galleries in this room showed off a great range of the museum’s collections, the exhibits had got rather tired.   Now the room is full of natural light and beautifully displayed objects.

A case tucked round the corner behind the new teaching space is filled top to bottom with nineteenth-century Fijian cannibal forks.   I hadn’t come across these before, and was intrigued by the smooth, dark wood, elegant prongs and decorated handles of the anthropological objects.   Alongside these are displayed replicated objects, made by members of the Department during a project lead by Alana Jelinek, AHRC Creative Fellow in the Creative and Performing Arts.

The replicated cannibal forks have been carved from white woods including sycamore and ash, so they make a dramatic contrast to the dark, shiny surfaces of the Fijian originals.   The case is illuminated by a video of a making event, with audio of museum staff discussing the forks.   I learnt that cannibal forks are surrounded by controversy, with a rich yet dangerous mythology that has perpetuated barbarous tales of the Fijian people.

A current view is that the forks were nothing to do with cannibalism, but were made to satisfy the curiosity and predilections of collectors who brought them back to European museums.

I took the opportunity to make my cannibal fork, inspired by the beautiful workmanship of the Fijian craftspeople who had carved theirs for the Museum’s Victorian benefactors.   It is made on a piece of cherry from North Farm, West Overton and carved using a hatchet, pushknife and sloyd knife.   Originally I intended to carve beads around the upper handle, but decided to give the fork a face after I saw some footage of the Kingsteignton Idol.   The idol is a wooden Iron Age artefact, excavated in 1867.