A few days ago I came across an unexpected example of toolmarks in a piece of oak, so having taken a snapshot it has prompted me to collect a few other examples and post them together for comparison.

There’s nothing scientific about this little collection of photos.   I chose them because of the way they contrast one another.   Unlike the fascinating sense from seeming chaos that Maisie Taylor was working on, analysing marks left by Bronze Age axes on thousands of preserved timbers at Flag Fen (Peterborough, UK), my pictures should suggest some of the variety to be found in edged tools – sharp cutting tools, usually made of metal these days.

So here’s the first: 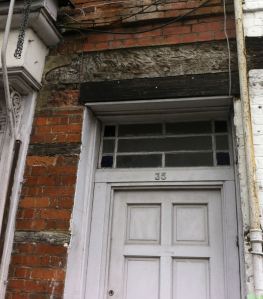 This is a snapshot of the private access door for the residence and shop-rear at 35 High Street, Royal Wootton Bassett.  The rich colour of the bricks offsets the pale, shabbily-elegant paintwork, just as the fine fanlight contrasts with the well-weathered oak lintel above (I’m not sure what’s underneath that more recent, dark wooden batton which has been screwed on above the fanlight – probably bricks).   The rough surface and shaped cutaway in the lintel caught my eye as I walked past.   It looks like there had once been a porch roof over this door, with a decorative moulding perhaps which had to be accommodated against the lintel – hence that curved rebate cut in the wood on the left-hand side.

There are at least two different toolmarks on the lintel’s roughened surface.  On the left-hand side, inside the curved rebate, there is a group of very straight, square cuts.  They do not, however, slice all the way through the wood fibres to remove chips from the lintel’s surface.  Instead, the person making the cuts stopped the tool before it sliced all the way through; leaving wood fibres lifted from, but still attached to, the lintel.

The tool used to make these cuts must have had a straight, square edge.   It could have been an adze or large firmer chisel.   By contrast, the second set of cuts covering the rest of the lintel were I think made with a large axe.   The surface has been roughened by cutting long chips out of the oak, striking the surface twice each time to remove pieces which would have been characteristically triangular in cross-section.

Axes can also be used to make really smooth surfaces.   Here’s one way.   Marks left by axing chips from the end of this billet are themselves removed by using the axe to shave off wafer-thin slivers of wood:

Gently curving marks on the wood surface show where the axe stopped each time, to remove the chips that are left scattered on the chopping-block. Whilst the marks are shallow, they can be both seen and felt clearly.

Using the same axe to shave away slivers from the wood removes the evidence of the previous cuts. The small, thin shavings lie scattered on the chopping-block. The wood surface is silky-smooth to the touch.

Here’s another technique, being used to thin a strake in the Roskilde shipyard.  A strake is a plank for a clinker-built boat.   First, a small axe with a curved cutting edge is used to cut along the length of the timber.   Each cut is perpendicular to the length of the strake, cutting through wood fibres but not removing chips.   Secondly, a broad axe is used, cutting from the top of the board downwards, to remove large, thin pieces of wood; these are more like shavings, which you can see carpeting the ground.

The boat-builder is thinning this plank to make a strake. He has worked his way along the plank, axing into the wood to lift, but not remove, chips from the surface.

He then uses a broad axe – with a long, straight cutting edge – to slice through the partially-cut wood fibres. He moves the axe downwards, cutting from the top of the plank. This removes large shavings which are scattered on the ground. The axe handle curves to the right, away from the plank, so that his hands pass freely with each stroke and don’t hit the wood.

These two techniques leave characteristic waste material, but less (if any) evidence of tool marks on the wood that has been cut.   By contrast, the planks used for the walls of the Trelleborg longhouse are covered in shallow, broad facets (almost the size of my hand) left by the tool – probably a wide, near-straight adze – used to finish each surface.   These are difficult to see, in the shade under the roof, without a raking light.

The external surface of the hall wall, Trelleborg.

The facets look a little like flake scars on a piece of knapped flint.   Knapping is a reductive process: flakes are removed from the parent stone to make a tool; they can’t be stuck back on; and the more that are taken off, the smaller the object becomes.   The scars are caused by the fracture of stone which has been hit at one point, the shock waves passing through the stone and forcing a flake away.   Carving is also a reductive process, but the scars – the facets left on the wood – are formed in their entirety by the sharp tool edge slicing through the wood fibres.

Interpreting the hammer types used to knap flint is possible by studying the nature of the waste flakes and the scars left on a flint tool (see for example Butler 2005, 2011:37-42).   Theoretical foundations and a range of methods have been developed for that type of study (Andrefsky 1998, 2005).   The huge variety in edged tools presents different analytical problems for woodwork.   Take this pair of photos:

The handle of a Cannibal fork in elder, April 2014 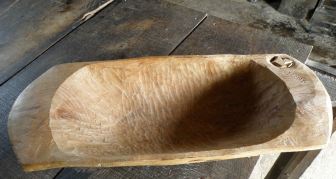 A large wooden bowl in the farmhouse at Trelleborg.

On the left, the facets on this piece of elder are thin, flat and straight.   They could have been left by any number of different tools, ranging from a tiny knife with a blade no more than 2cm (¾ inch) long to a drawknife – of which there are many different types and styles.   Not only that, but more than one tool type could have been used during the shaping.

This was almost certainly the case for the bowl in the photo on the right.   The whole of the interior is covered in long, narrow, concave facets left by curved tools.   Some of the cuts  near the handles finish with snapped fibres, not a clean cut (a bit like a hinge or step fracture in flint knapping).   This suggests that a small adze with with a tightly curved edge was used to remove these chips.   A bowl interior doesn’t have much room to work in.   Sometimes it isn’t possible to slice cleanly with the adze all the way through the wood to remove a whole chip.   Instead, the chips snap out.   This is more likely to happen, the steeper the sides of the bowl.

The facets inside the long sides of the bowl, however, are all clean cuts – despite being the steepest and most awkward part of the bowl to carve.   This suggests that a narrow chisel with a shallow sweep was used.   The small adze is moved with a hammer-like action against the bowl interior, whilst the chisel is pushed from the top of the bowl towards the bottom.   This means that it is possible to slice through the wood fibres and finish before either snapping a chip out or hitting the bottom of the bowl.

Finally, here is a set of images to illustrate a range of toolmarks and wood chips all taken from one piece of wood, following its reduction sequence:

[2] the first cuts along an edge, cutting the fibres so that chips can then be removed using a long, slicing action from top to bottom.

[3] the ash billet and chips removed from all four edges.

[4] each edge is left with two types of toolmark: the first is the remains of the bottom of cuts made in [2], cutting into the wood and through the fibres; the second is left by the longer, slicing cuts running parallel with the billet.

[5] mostly the long, slicing cuts down the edges finish cleanly, but sometimes the wood fibres at the end of the billet tear-out before the cut can slice all the way. This leaves a characteristic difference between the smooth, cut surface and the rough, torn surface.

[6] an axe can be used to shave (lower, curled wood chip) as well as to cut (upper, sliced wood chip).

[7] shaving the billet with the axe starts to remove the angled edges.

[8] but the billet won’t really become rounded until it is further shaped with a drawknife.

[10] even though the drawknife is broad and wide, it is an effective tool to remove the worst of the billet’s angular edges.

[11] but it’s not until the billet is turned that it becomes truly rounded. The toolmarks now are all perpendicular to the length of the billet, as it is cut with a chisel using the rotary motion of a pole lathe.