Last week I attended EAC2014 – the eighth annual Experimental Archaeology Conference – held this year in Oxford.   More on that later, I shall write a post about my experience of this interesting, informative and fun gathering shortly.

Visiting Oxford offers the opportunity to visit the fabulous Pitt Rivers Museum, and the Conference organisers had arranged sessions specially for participants to experience the incredible world of Henry Augustus Lane-Fox Pitt-Rivers and all the collecting that’s gone on since that eminent Victorian gathered in the world’s things.   The museum describes itself as “the University of Oxford’s collection of anthropology and world archaeology”; the understatement does it no justice.   It’s a surprising, shocking, life-affirming treasure-trove of human ingenuity.

There is so much to take in.   The objects are famously displayed in their Victorian fashion, with uninterpreted, crammed cases devoted to types of thing rather than place/country/period/culture.   Fascinating and frustrating in equal parts, this antiquarianism is a very important part of the museum’s character and delight.

It also makes it easy to see things for the first time, no matter how many visits you’ve already made.   This happened to me on Friday last week.   Just beside the side-door through which we entered the museum, I spotted this (forgive the poor photo, I took it using my mobile, in the low lighting): 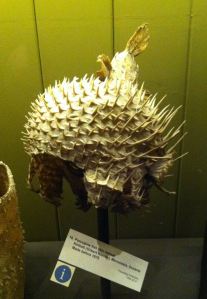 It’s object number 1884.32.31, collected before 1878 having been purchased at auction.  It traveled around various of the London museums when in 1884 it was donated, one of the Pitt-Rivers “founding collection” objects.

It’s a bizarre object, part of a set of body armour designed to protect the wearer from weapons edged with shark’s teeth.   The helmet’s arresting appearance would have served to make the wearer look as threatening as possible.   Who on earth ever thought of skinning a fish to make a helmet?!   What processes were required to cure the skin and ensure that the head-sized shape was kept open until the skin stiffened?   And how was all this done while the poison tips of the spines were still active?

I admit that my perception is probably strongly influenced by two key issues.   First, British native fishes don’t naturally spring to mind as potential sources of defensive clothing.   Secondly, there isn’t anything quite like this in the British archaeological or ethnographic records.   It’s easy to be amazed and puzzled by the exotic.   The key thing to remember is that, “Kiribati is comprised of low-lying coral atolls, and so very few raw materials are available. Consequently, this armour is made from woven coconut fibre and fish skin.” (Mills 2006-7).

The porcupine fish skin helmet may be weird and wonderful, but it serves to remind us of the importance to people’s lives of access to materials, ingenuity of thought and skill in making.

This post is the first in an occasional series called “Weird and Wonderful”.