When the huge sarsen standing stones were raised at Stonehenge around 2,500BC, they were pale and sparkly.  The natural, weathered, grey-brown surface had been knocked off many of the stones to create just the right shapes and surface effects.  Much of Stonehenge would have looked almost as white as the chalk dug out of the foundation pits for the stones to stand in. 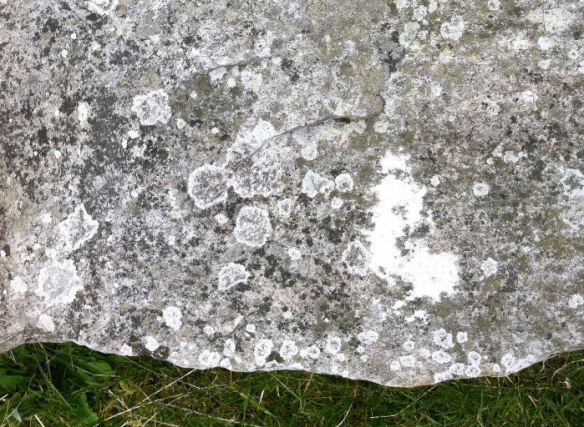 Two years ago I spent a day out in north Wiltshire, filming with a team from October Films.  We spent most of the time amongst recumbent stones talking sarsen, but I also did a little bit of stone dressing for them (on a piece of waste sarsen on a local farm, collected up with lumps of hardcore, disused fencing, empty feed containers and other agricultural detritus).

The team used the footage in episode two of Stonehenge Empire (google it, mixed reviews but with some good bits plus much coverage of the awesome Hidden Landscapes project).  (And you can see me dressing a piece of sarsen in this cool English Heritage video, “People Moving Stones“.)

Two years on, and the dressed patches are gleaming.  The rain has washed away all the loose grains.  Lichens have yet to colonise the broken surface of the dressed stone.  Two and a half thousand years ago, sarsen stones at Stonehenge gleamed like this.

How long did it take for the weather to bring back the grey-brown, for the lichen to grow?   Two years is too soon.   Twenty?   Two hundred?  The fascinating report on the analysis of a laser scan carried out at Stonehenge in 2011 makes great reading.  Even after 2,500 years, it was possible to record and interpret the dressed surfaces on sarsens and  bluestones.  Some effects of dressing and shaping have lasted all this time.  But not the colours.

I wonder what stories about Stonehenge were passed down the generations.  The monument we know today has had an extraordinarily long prehistoric life.  How long was it before the gleaming whiteness of the sarsens was forgotten, or the journeys of the bluestones, or what it was like to make the Avenue?  When the axe carvings were made on the sarsens, Stonehenge was almost 1,000 years old.  Had the sarsen weathered back by then, did the little Bronze Age axe head shapes stand out all white from the surrounding grey-brown?

Given that two years is no-way long enough, an archaeological experiment to investigate changing colours at Stonehenge from a phenomenological perspective is probably not on the cards.  More’s the pity.  But take it from me – that’s how Stonehenge used to look, for a while, anyway.