This is the third post of a group of posts about the prize objects that I made earlier this year for a lucky Young Archaeologists’ Club Branch.

I needed to make things which could be easily posted – small, and/or lightweight.   Some bone and antler artefacts seemed in order.

This also meant I could stretch the date range covered by the objects in the group.   The oldest and the youngest are made of bone.

These incised horse heads on a rib are the oldest.  The animal portraits are based on a find from Courbet Cave, in the Aveyron Valley (France). The original (in the British Museum, Palart.508) dates to around 11,000BC, and both sides of that rib are carved with horse heads. The original is also broken, but as the bone ends would then be jagged, sharp and fragile (not good for handling by YAC members!) I have kept the whole rib.  It has been suggested that the horses are running, because their heads are raised, necks out-stretched and ears back.  Showing the shape of the lower jaws and manes with shading lines rather than solid lines makes these very naturalistic depictions; the artist was depicting a symbol of a real thing, which is an important accomplishment for more than 12,500 years ago.

The youngest is this pin, cut and shaped from a piece of cow’s canon bone.

It is based on a find from Jarlshof, Shetland.  Pins with axe-shaped heads have been found from the late Roman period onwards; this example is Viking.   Buttons didn’t come in until the medieval period, so until then pins and brooches (and straps and ties) were the commonest ways to fix clothing. Pins were probably used to fix hair, too.

In the middle of the date range are these antler dice. 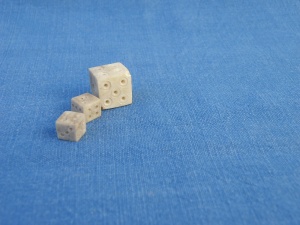 The large die is based on a Romano-British find from Frocester Court villa (Gloucestershire). The two small dice are based on an early Anglo-Saxon find from Gilton Town (Kent). The Frocester Court die is actually made of ivory, but all three copies are made of antler.  Ivory is not easy to get, for good reasons; and many archaeological dice were made of antler.  Cube-shaped dice were a Roman introduction.  Before then, dice were longer and thinner, made from shafts of small long bones, and only had the numbers 3 to 6 carved on them. The commonest Roman numbering system for dice – which we still use today – is for the values of opposite sides to add up to 7.

MacGregor, A. (1985) Bone, Antler, Ivory and Horn. The Technology of Skeletal Materials since the Roman Period  Beckenham: Croom Helm Ltd